Same morning routine as the day before. I wasn’t in a rush since I camped about 4 miles from some hot springs. My thinking was who wants to sit in hot springs in the morning when it’s so cold outside?

7:05 I began my hike. The trail continued to follow above the beautiful Deep Creek. 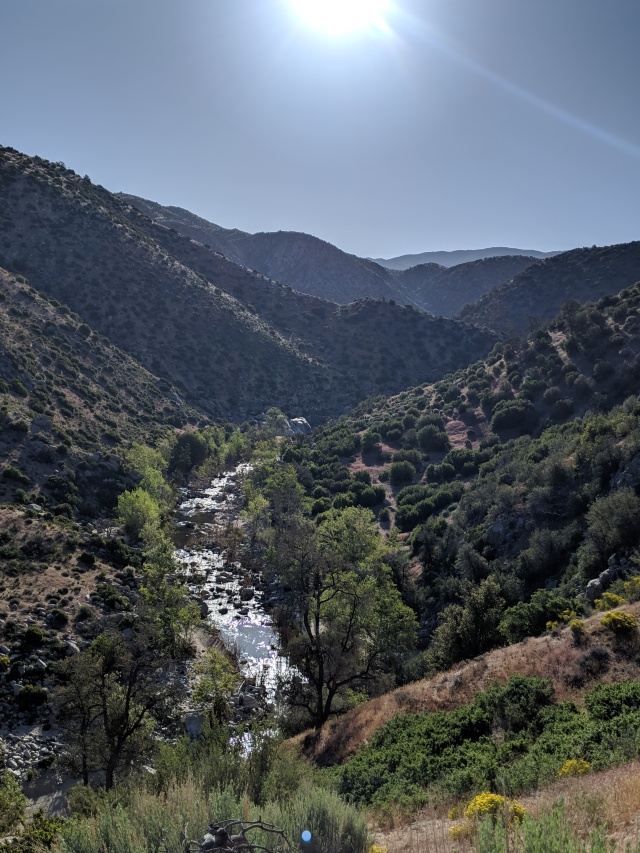 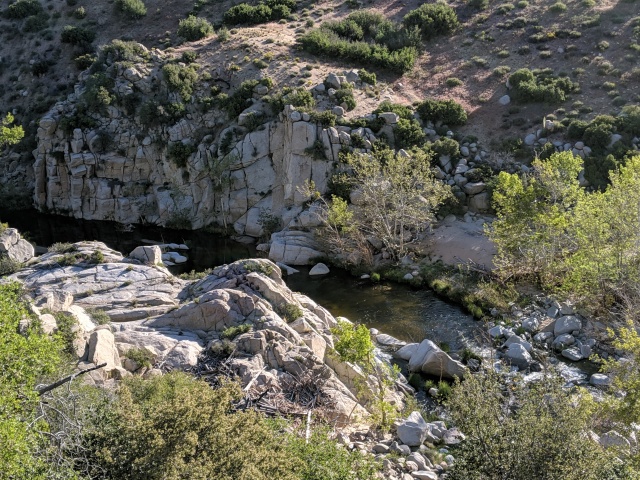 Like the day before, I went for second breakfast just a little ways into the hike. This time it was at this nice little nook by a stream where I filled up water. 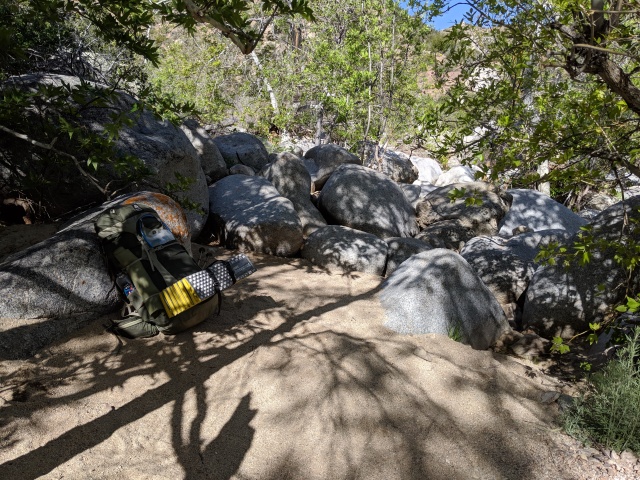 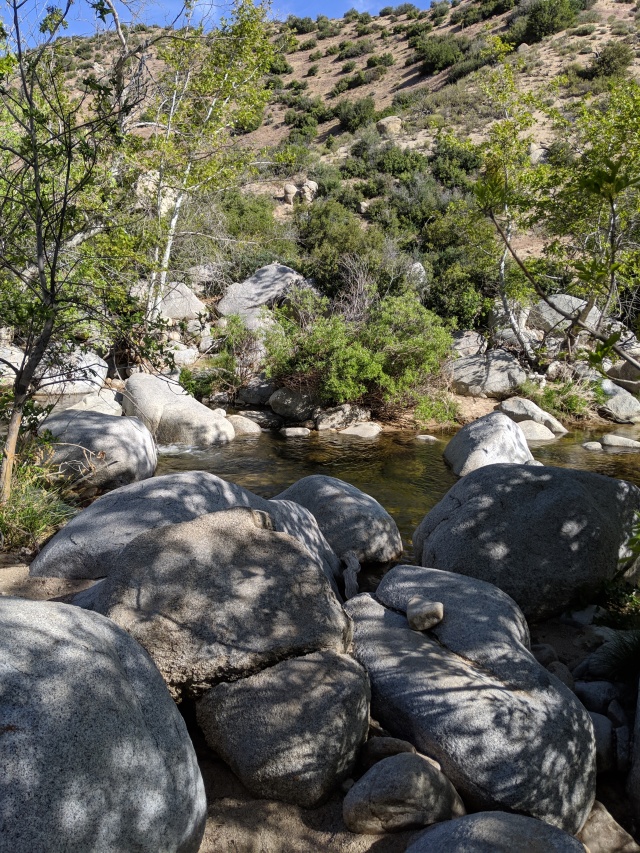 I watched a few folks cross while hanging, so knew the right path for rock hopping to stay dry. I made it to the hot springs around 9:45am. My right thigh was still hurting slightly, so I was ready to see what these things were all about.

So in my Guthook’s PCT Guide app it gives this tidbit, “The hot springs are well known as a location for taking a dip in the natural hot tubs, but also as a clothing optional location.” Sure enough, as I walked down the side trail to the river, I saw a mans white behind with nothing but his full pack on (not sure why he had his pack on at that particular moment).

I was a bit hesitant…this was not a normal situation for a young(ish) lad from West Michigan. But, I found myself a little out-of the-way space to get into my soaking attire…I did not feel the urge to free myself of clothing entirely, but rather opted to wear my shorts into the pools. As I continue describing this tale, rather than tell who all had clothing on and who didn’t, I’ll instead just say most did and all of the PCT hikers I knew did.

It wasn’t exactly clear to me at first where the hot springs were, but an older gentleman came up to me, offered me a beer (Ballast Point Sculpin IPA – they love their ipa’s out here), and described the different pools, their location, names, and various temperatures of each. He said he hiked around the first 100 miles of the trail, but backed out when his back started hurting. He lives nearby apparently.

I ended up finding an unoccupied pool hidden behind within a rock structure. It was heavenly! Much hotter than I anticipated, more like a hot tub than a warm pool. Their was algae on the rocks, but sandy bottom. I soaked for a while, enjoying my beverage, and feeling the soarness in my leg dissipate.

It was too hot to stay in long, so I climbed up to the one higher that had a trickle feeding mine. I ended meeting the girl I’d camped near a few nights ago, Stephanie aka “Calzone.” She is from South Bend, Indiana area, so we both knew/had visited a lot of the same areas and such. 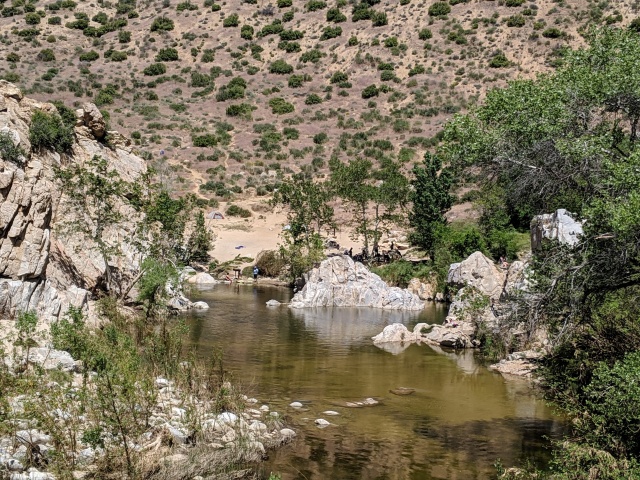 Next, I felt I’d really cool off and take a dip in the river (Deep Creek). And what better way to do so than by using this rope swing to jump in, right? 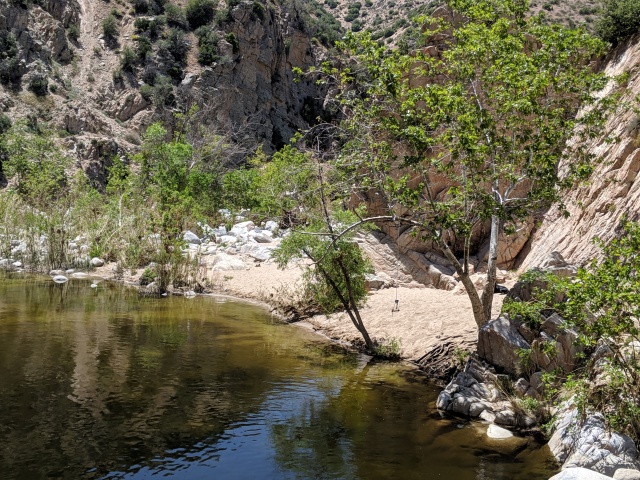 And so I did, and it was freezing and it was great…until I resurfaced and realized everything was a blurry all of a sudden. I felt my face and yup, glasses gone. “Well darn tooting,” I thought to myself, and “how stupid am I not to have seen that coming!”.

Staying calm however, I tried to swim away near the surface so as not to disturb the bottom. I then peered through the water and looked for them. There wasn’t much current, and the water surface was pretty much smooth, but there was a glare from the sun. Plus, did I mention the water was freezing! I tried looking, diving down and searching (it was just over my head) for a long while, but no such luck 🙁.

I retreated back to the hot springs to warm up. The problem was, I had gotten myself really really cold. Some of you might remember times when you’ve witnessed me in this state…it’s not pretty. I shake uncontrollably to the point where I cant talk really and my lips turn purple (purple lips unconfirmed during this particular occasion). I went to the hottest pool, but felt like I was scolding my skin, and still wasn’t warming up. Plan B…I went to my pack and put on my puffy coat. Then ate some snacks in the sun. This did the trick! I also put on my prescription sun glasses that I’d bought just before the trip, which will be what I wear until my next resupply shipment (I’ll have the fam send my back-up pair of glasses in the package).

I returned to the pools and found many hiker friends had shown whilst I was dilly dallying in the dang river: Pinanta, Two Shoes and Jo, Snickers, Jan, Lady Bling, Songbird, Three Bean, and Foxtail (thought I’d list all the odd names). It took me a while to get my spirits up, but the good company helped. It was very enjoyable actually and I stayed for lunch too!

I made one last attempt to search with my polarized sun glasses, but didn’t spot them (I could see so much better though!). Foxtail was kind enough to go searching too! Unsuccessful, but still a very kind thing to do. I suspect the gentle current swept them downstream under a rock where they’ll rest for all eternity.

Finally, at 1:45pm, I left the hot springs vortex that had sucked me in for 4 hours! I wasn’t the longest by any means though…many planned to stay the night and one guy I talked to said he’d been there a week!

The trail climbed up and then followed along the creek again. At one point, we crossed over on this gnarly colorful arched bridged. 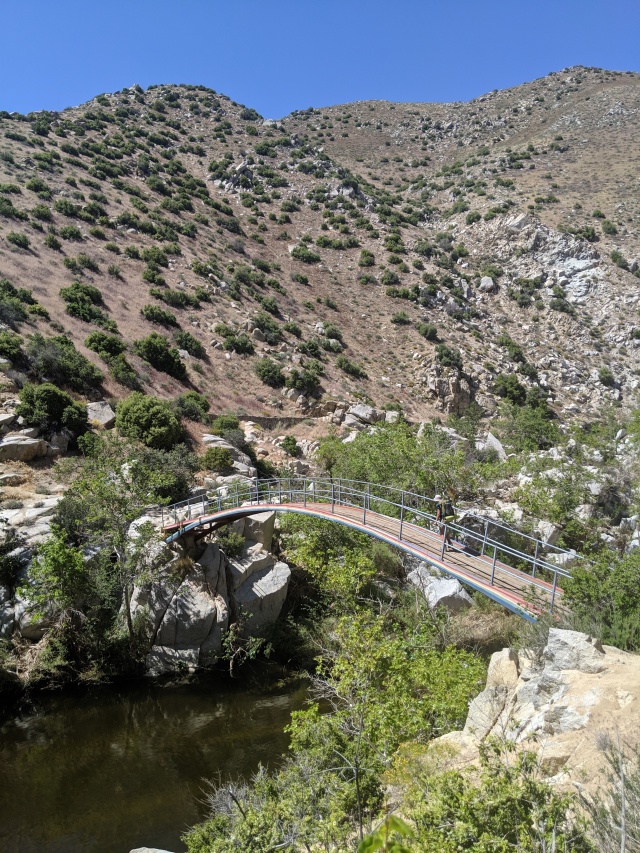 Soon after, I ran into some teenage youths that must have been doing some camping. They had their belongings in several bags and small backpacks and looked to be struggling to carry it all. Plus, the one guy was carrying one of their two dogs. They told me the little pug dog being carried (Mr. Pig I believe he was called) had respiratory problems. Later they said it was kennel cough. And yup, when I got close he was wheezing away the poor little guy. Anyway, I ended up carrying their duffle bag of blankets (it was light!) for a little ways, until we got here and parted ways. 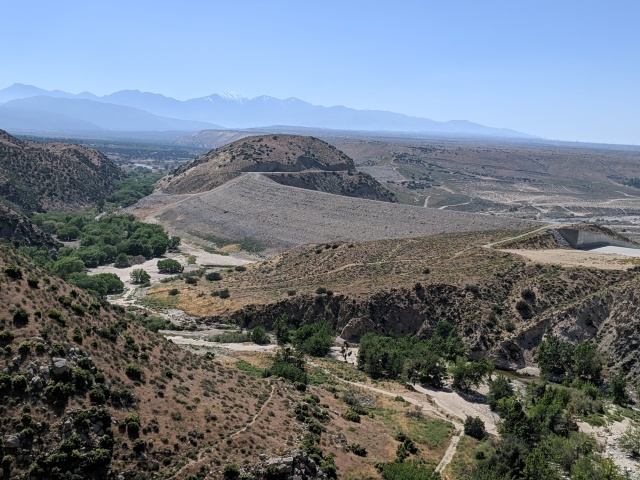 My right thigh was struggling something fierce at this point. The downhill did it in. It wasn’t really bad at all when level or going up. Either way, I planned to go slow and get an early tent site.

I got service at one point and called Dave H telling my sad glasses tale and asking him to add the replacement pair in with the resupply shipment. Then a bit further on, I got a chance to call brother Abram and catch up. His wise elderly advice when I told him about my leg was to use icy hot, because “that’s what Shaquille O’Neal uses” and also to “walk it off.” I decided to try the latter piece of advice, go for a nice long walk, maybe to Canada. During my last stretch of the day, I left the creek area finally and got into some ridiculous flowers.

At first, I was wondering if the plateau-like feature (right side of pic below) was a human made thing (like a giant landfill) or resulting some sort faulting activity? Definitely seemed to be natural once I got up to see it all. 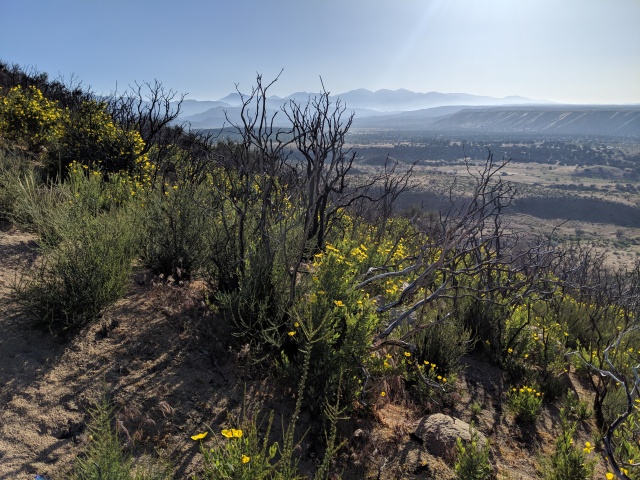 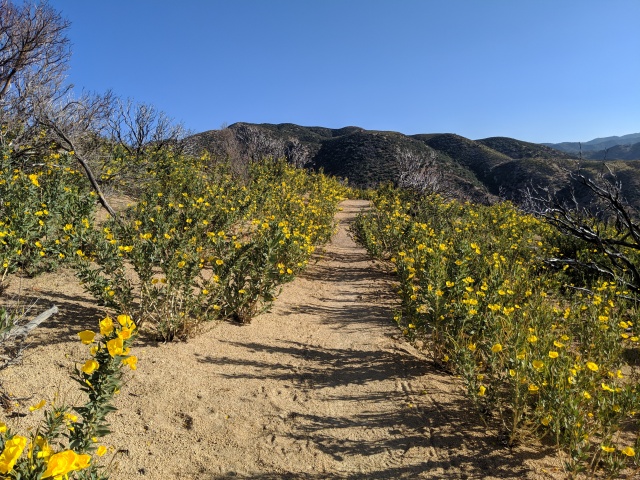 Eventually, I found a water source, and actually back tracked a short distance to a spot that I’d seen, not wanting to risk going further without having a known camp site. Plus, I knewew it’d be a righteous spot for the sunset. I wasn’t disappointed! Not sure if I like the flower, rock, or burnt shrub photo best… 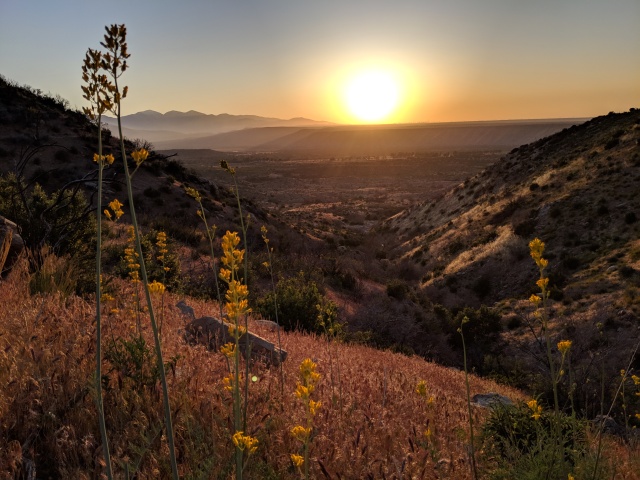 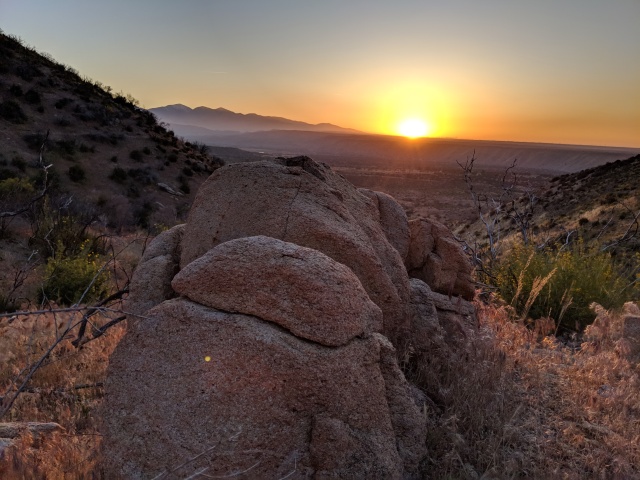 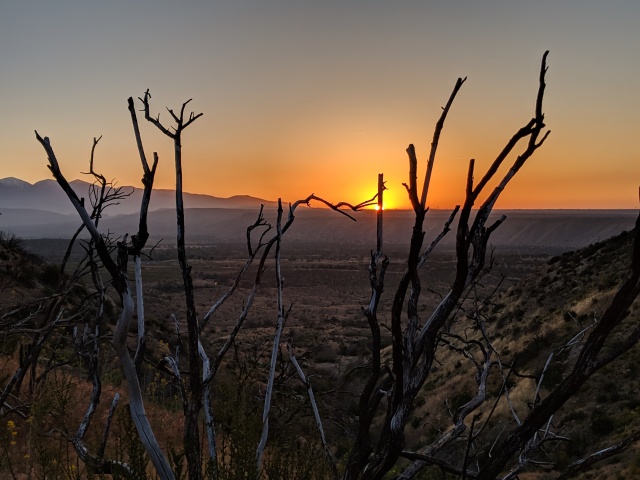 I also gambled on this meal and wasn’t disappointed! 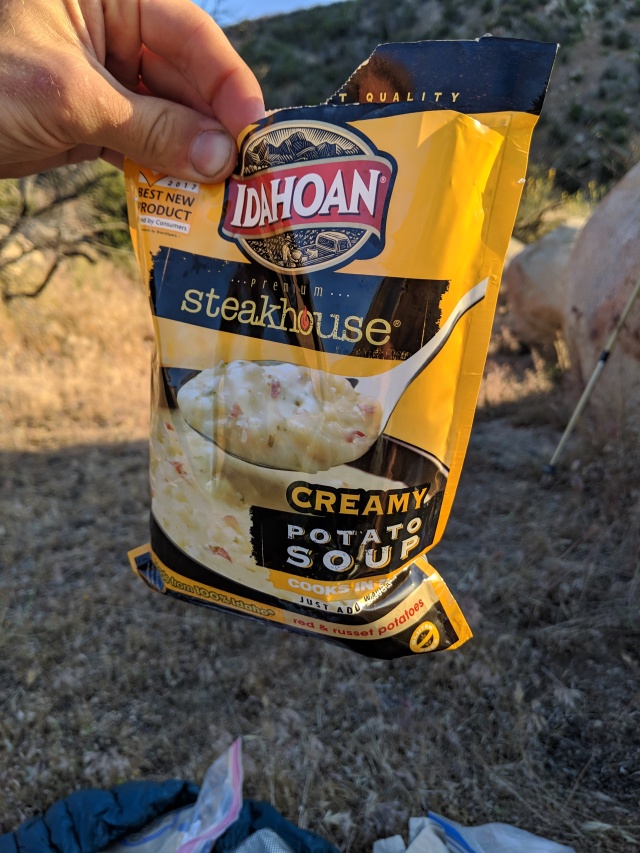 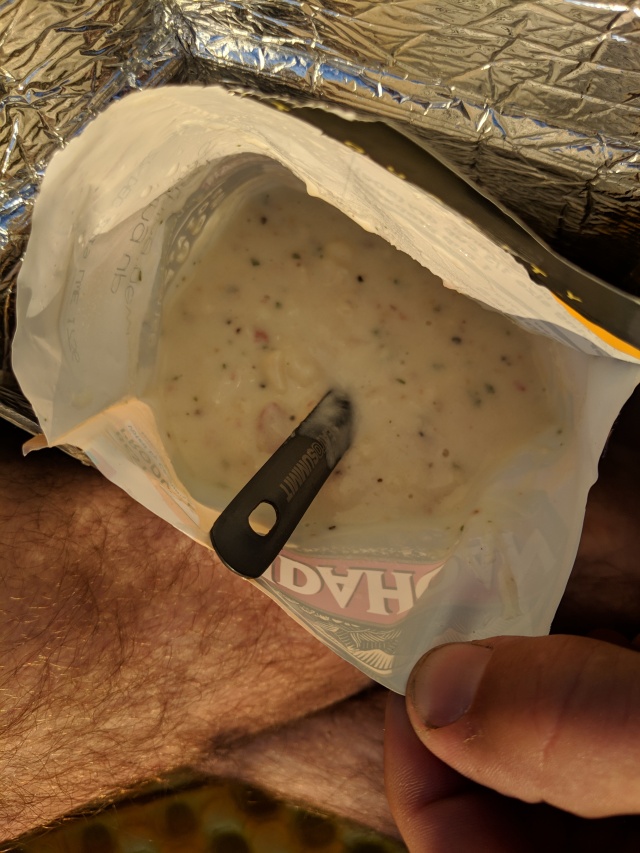 I opted to cowboy camp, mainly out of laziness. This was my mess while cooking…then after a cleanup. 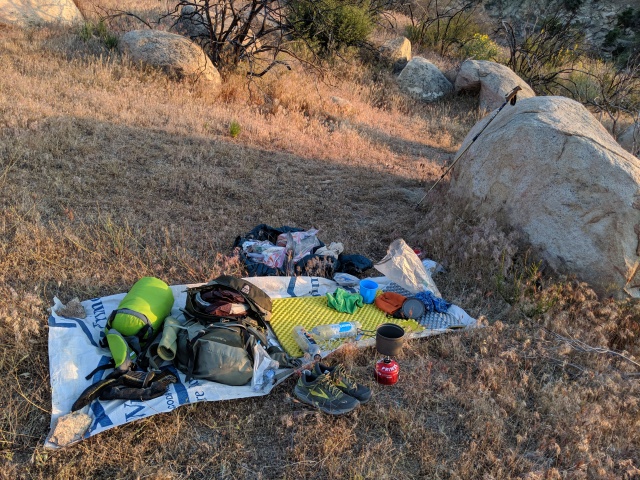 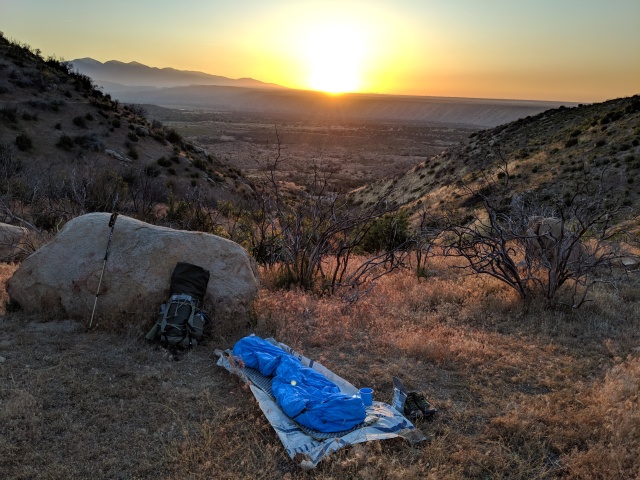 I was scared of ants attacking in the night, I could see some hanging around, but was so tired I didn’t care. They sleep right?