I attempted to pack up stealthily since Juliana seemed to still be sleeping in her tent, but felt like I was being loud. I drank the last swallow of my water and started hiking at 7:00am.

It was a nice cool morning so I started with my gloves and beanie. The trail was downhill and snow free for the most part! My leg seemed to be in good shape still. The highlight of the morning was once again walking along looking down on the “coast” of the “cloud ocean.” I thought the trail was going to go out on that peninsula, but nope, stayed up high. 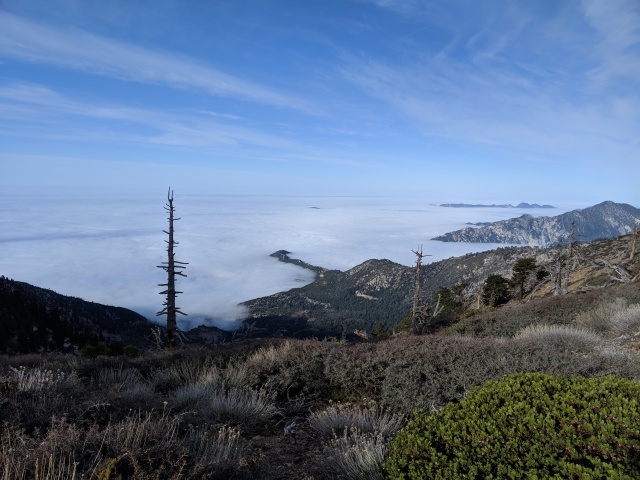 I was also digging these benches. I think since Baden-Powell was something like the founder of the boy scouts, these trails are well maintained by current scouts. Just a theory.

Around 830ish is when I made it to Little Jimmy Spring, which consisted of a spout of water coming out of a pipe in the rocks. See look…

There was also a giant tree that I liked..

The water was tasty. I gathered up about 2.75 liters and then climbed a short ways to Little Jimmy Campground to have breakfast at the picnic tables. This was where I had originally thought of camping. There were some folks packing up still while I was there. They planned to head into Los Angeles today, which I didn’t know we were even close too. I guess we’re just NE of the city a bit.

Several others from the day before continued by along the trail while I ate and Marguerite and Ranger Dan stopped here too. After breakfast, the trail continued going down. At one point, I saw and picked up someone’s butt seat/pad hoping to return to it’s owner. I reached Isip Saddle a road crossing/parking area. The road is closed I believe from some rock slides. There was a bunch of hikers hanging there and I found the butt pads owner – Tidbit.

At 11:00, I began hikng upwards towards Mount Williamson. After 1.7 miles, there is a side trail that leads to the top. Most continue on without taking this, but I got it in my head that it’d be a nice lunch spot at the top. So off I went. I came across a duo I’d seen before, a dad and son, and followed behind them. I kept thinking that this seemed longer and more difficult than my guide app described. Finally, I checked my location and saw that we’d gone way past the peak.

When I talked to the duo, I learned they thought they were still on the PCT. They only had paper maps and took the side trail rather than the continuation of the PCT. So, back track we did. Talking to the son, I learned that his name is Alex and lives in Santa Fe, New Mexico and his dad, Wolf, lives in Berlin, Germany.

Eventually, we made it to where I’d made my mistake. I pointed them in the right direction back on the PCT and then sat on the top and had my lunch. I ate quicker because I felt I’d wasted some time. What would have been a 0.8 mile detour (0.4 each way) had turned into a probably 1.8 mile detour. It wasn’t much of a peak and also seemed a bit overkill to name a mountain after b-ball star Zion already. I mean he didn’t even bring his team to win the National Championship, come on.

The next unfortunate event, the one that was truly very sad, came about on my way down. When saying hi to a guy he asked if I had service at the top because a girl had hurt her ankle bad around the trail split junction. I said yes and that I had my GPS too, and then continued down to see what was up. Next, Ranger Dan passed with no pack on his way to the top to call someone.

When I reached the junction, I saw it was Marguerite lying down on her sleeping pad with her foot up on her pack. She was grimacing and bummed out, but seemed to have calmed herself down when I reached her. Her and Dan had both heard a pop and she thought it was sprained. She’d sprained it before earlier on and had to rest 2 weeks off trail while her two sisters continued on.

Guy who first asked me about cell service turned out to be a day hiker named Matt who smartly had filled up snow and brought down. He put it in a ziplock to place on the ankle. I felt pretty useless, but sat and talked for a while offering what I could. Soon, Dan came down unable to reach the person they were trying to reach, a friend of hers named Doc who had military medical training I guess. The plan was made to go back down to Islip Saddle. We all remembered having cell service at the parking area, so the idea was to get her down their and try to get a trail angel to pick her up to town. My only contribution was my duct tape which she used to secure her ankle brace even more. Matt was going that way anyway and Dan had been hiking with her, so together they carried her pack and things, which left her to walk weight free. I kept offering to go back with them to help, but she seemed to not want us to make a bigger fuss about it. She was able to walk with her poles, so off they went.

I continued on after a while standing there debating internally how I could have helped more. I thought I’d try to get cell service and see if I could arrange a ride for her, but no service for the rest of the day. I got her number so I’ll have to check-in later and see how she’s doing!

When I got to the highway, I ran into Doc, the guy who they had been trying to reach. He decided he was going to walk the road and see if he could have any luck finding a ride for her. I was confused by this since the road is closed to traffic, but off he went. I still didn’t have cell service, but can use my GPS to send texts, so I sent one to Marguerite telling her I’d bumped into Doc and where he was heading.

Just after this, some hikers made there way down to where I was: Snickers, 3 Bean, and Foxtail! I asked them if they’d seen Marguerite and they had, she seemed to be getting down ok…same thing, they wanted to help, but didn’t really know what they could do. After a break, we continued together down the trail. We had a mile stretch that went up, then down, then back to the road. 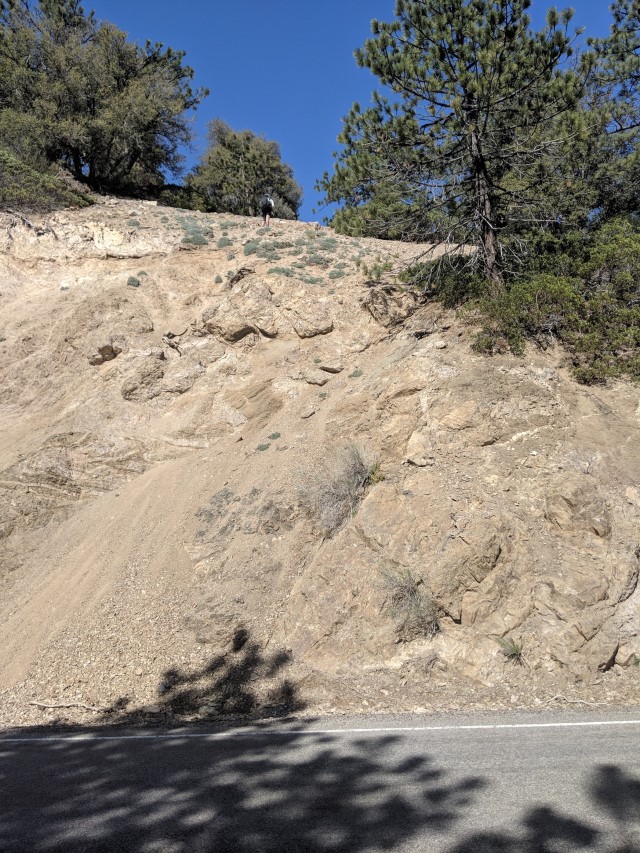 Then, the third unfortunate event, this one not actually bad, was that the next 4 mile’s of trail was closed due to the endangered Mountain Yellow Frog. You do your thing frogs! The detour took us walking the road and then cutting back on a trail to the PCT. Down the road we went.

It felt long being on the road and I was very happy to have their company. Eventually, we made it to Buckhorn Campground, which looked empty, and then found our way to the trail that would take us back to the PCT.

It was a very beautiful walk filled with gnarly giant trees, rounded boulders, a couple nice creeks, and a smooth gentle downhill grade. At the same time though, we were all very tired. 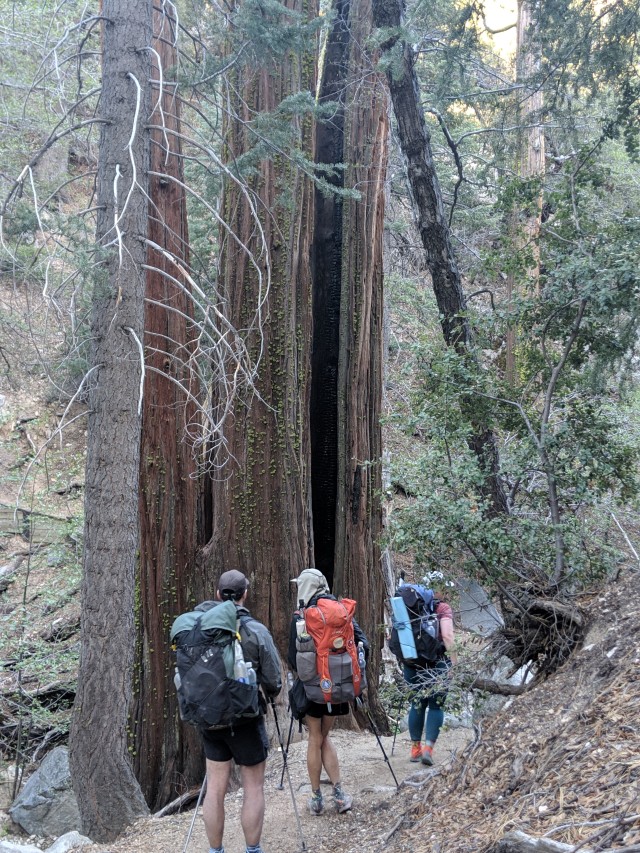 Once back at the PCT, we debated making camp, but there had been some comments made about bears in the area, so we trudged another 1.2 miles to Cooper Canyon Campground, which had actual bear box containers for our food.

We met Pinata at camp and had a late dinner together at some picnic areas. All these folks but me are some form of vegan, vegetarian, pescatarian. It was difficult to see with my shades 😕, but a good time eating together into the dark.