Through the Dementor Breeding Grounds

There is an ancient Mesopotamian saying, “The best part of waking up is Folgers in your cup.” I found this piece of wisdom to be full of truth on this particular morning. Around 6:00, I opened my tent zipper to find a cold, misty morning. The ground was wet, my tent fly was wet, and my shoes/socks that I’d left out were wet. I clambered back into my sleeping bag.

I spent some time on my phone updating log posts for the past two days that I hadn’t completed yet. I then made my coffee and oatmeal right in my tent vestibule space (between my actual tent and rain fly). Eventually, I got my motivation up and packed things up. It began raining lightly right as I had pulled everything out of the tent. Sweet. It actually wasn’t so bad, I was somewhat protected underneath the giant trees above. I took a picture of camp before I took my tent down.

Around 9:00am, after assembling my bright pink rain cover over my pack, I began my trek. I wasn’t even the last one out of camp either. Eric and Jill were still set up, likely avoiding the weather too. Very soon into my walk, I had to stop. The pockets on my belt strap were not covered by the rain cover and one had my GPS inside. Rather than risk it getting wet, I placed inside a dryer location. Then, onward to keep moving and get warmed up!

Despite the rain and fog, I was in pretty good spirits. I felt as though there were dementors all around, bringing the a chill and mist to the air, but Sumi acted as my patronus and kept the despair and gloom away (for you non-Harry Potter reading folks, you’ll just have to trust me that I’m not losing it)! Many things were just slightly different because of the rain and quite beautiful because of it…

I also got this tune stuck in my head and couldn’t figure it out at first what it was from for a while. Extra credit to you if you guess it…At least in my head that’s what I now remember the theme from MacGuyver being. Anyway, soon after this video I came across this odd thing. It seems like it’s the start of one of those yucca plants, but most I’ve seen seem to begin as those spiky ball things before the asparagus thing pops up. So maybe an entirely different species? That was all very technical Flora jargin. 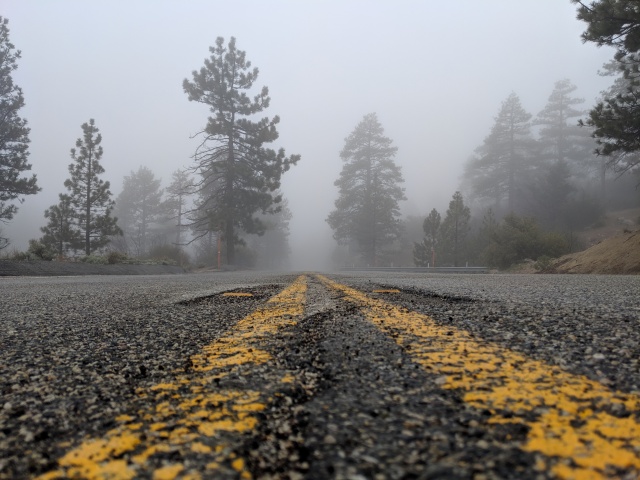 And I caught up to 3 Bean and Foxtail too. We crossed the 400 mile marker together (actually there were 4 different stone creations like this). 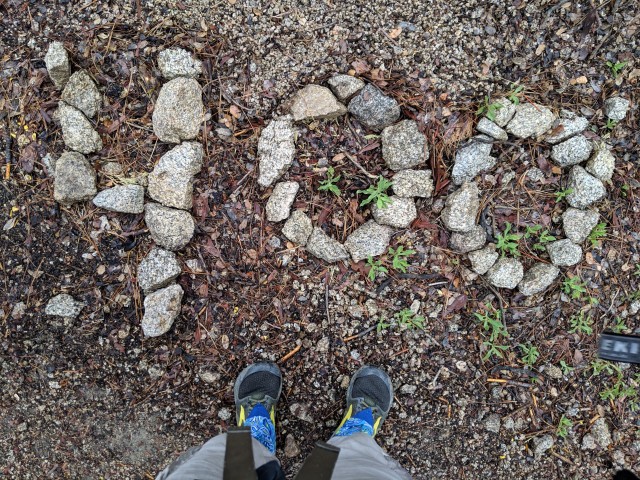 I was still to embarrassed to ask them to join me in my celebratory video, but maybe next time!At 11:30, I came across this beautiful site!

I was cold and hungry and loved the idea of finding a dry spot. So I pulled my sleeping pad out and sat on the porch to have an early lunch. My double portion of beef flavored ramen noodles and a second cup of coffee really hit the spot. I also had company. Two hikers, Sunny (from The Netherlands) and Ent (from Switzerland), joined me on the porch. Sunny got a kick pit of Holland, Michigan and the Tulip Festival when I told her.

3 Bean and Foxtail also showed up, but were a bit disappointed. They have plans to get off trail to stay with a sister, and had hoped to get an earlier pick up due to the weather, but the road closure struck again, preventing any cars to reach them. They’d have to go with their original plan and get picked up up tomorrow.

I was first to continue hiking again. The rain had pretty much stopped, so I was able to go without my pack cover. I also switched out my wet gloves (probs going to need to buy some water proof ones) to my “sun gloves,” which was really nice. Soon, I reached this parking area and said goodbye to Highway 2 finally. We thru-hikers never miss an opportunity to get rid of extra weight… 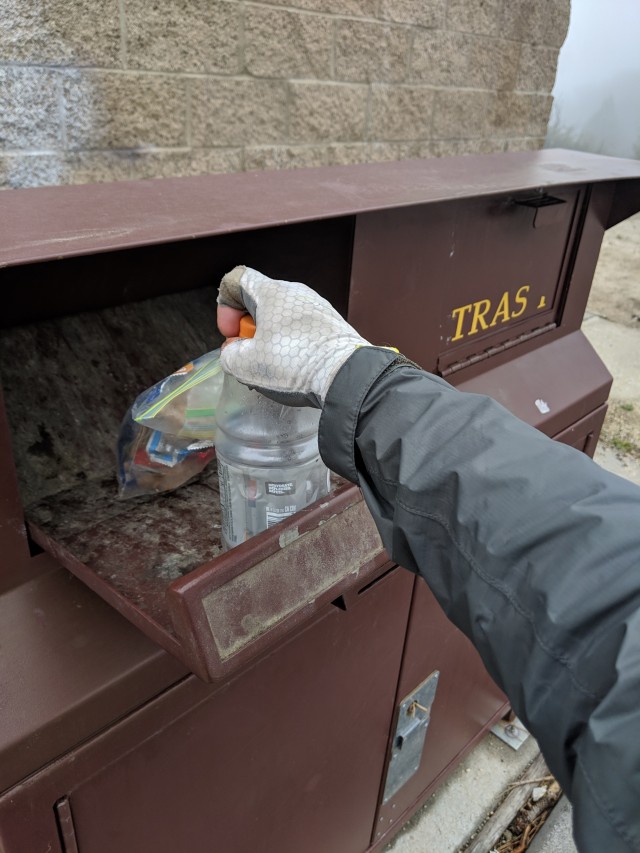 I learned about forks in the road from Amelia Bedelia, but still had to consult my Guthook’s app when both trails had the PCT sticker on them. 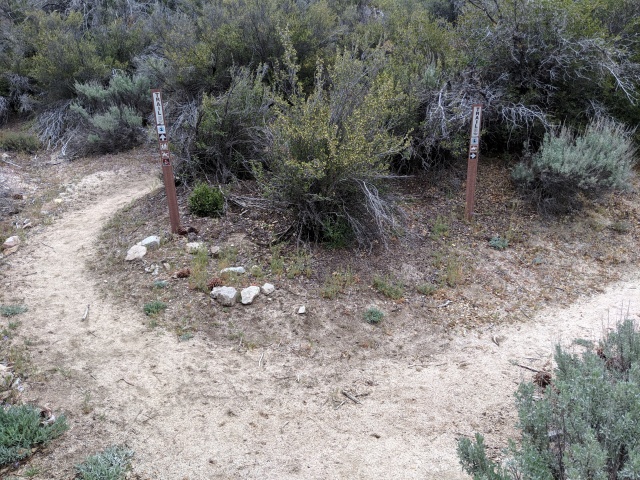 Left is right, right is wrong. I figured out that the right trail goes to a camp specifically for those traveling with horses. Just after this, I passed on this water source (yes, those are Tadpoles). 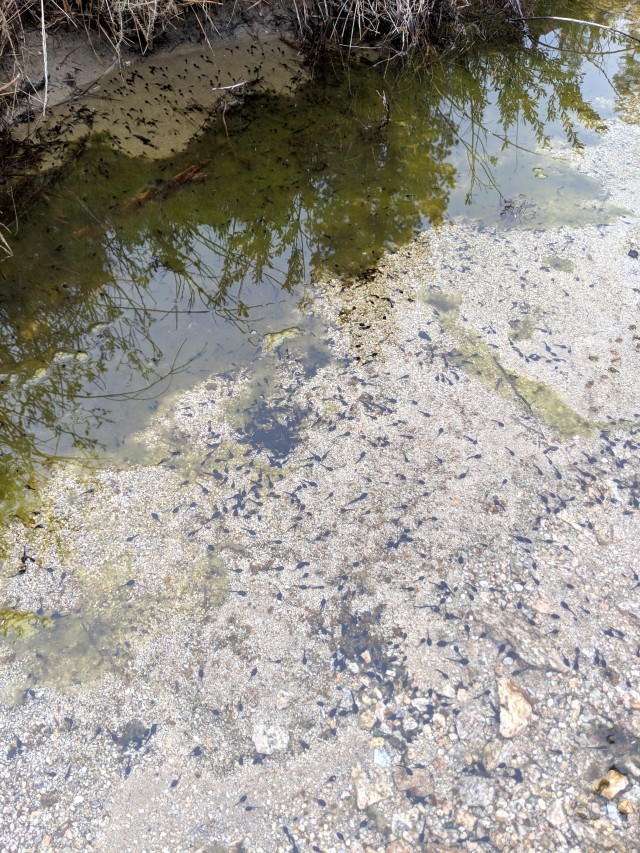 Towards the end of the day the trail was going up and all of a sudden the Poodle-Dog Bush was everywhere! It had long stems that reached out towards the trail trying to attack unsuspecting hikers. I didn’t rule out the possibility that it was actually some Venomous Tentacula that some muggle-baiter had transplanted along the trail (I’m just full of the HP references today).

I reached a spot to put my tent around 5:30 just as it began raining steadily again. I did my best to go quick, but a lot of stuff got a little wet. 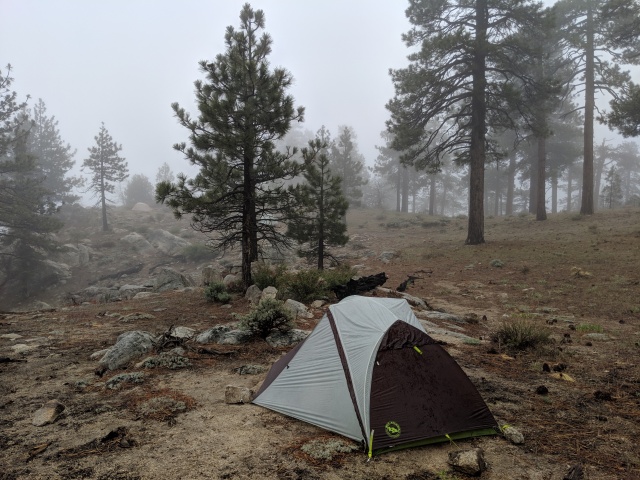 It was cozy once in the dry tent though.

Hoping tomorrow is sunny, but we shall see!