The Council of Grumpy Bear

For some reason I woke up early around quarter after 5am. Got up and went down to the front porch of the General Store to try out the WiFi. For a brief moment, I had the bandwidth to myself (it’s very possible my knowledge of how all this technology works is wrong) and I was able to slowly upload my photos to the website. Soon, Kool-Aid joined me as the next hiker to the porch area and started WiFi’ing it up too, which was too much for my phone’s uploading capabilities.

I gave up on me the internet, returned to my tent for some warmer clothes and rations, and then joined Kool-Aid on the deck for breakfast. We had to be quiet at first since a few hikers had chosen to cowboy camp over in the corner. They were up soon enough though and we commenced to cooking… oatmeal for him and fruit loops with rehydrated milk for me. Mm mm mm!

Dad joined soon later and brought with him supplies to make some instant coffee. I think I tried a few different times to get my blog stuff to work again, but the WiFi just wasn’t cooperating.

It was a cold morning and for some reason really cold to me despite the new addition of my Melanzana fleece (thanks to Jonathan and Christy Rose for picking this gem up for me!). Soon, other hikers made there way out to the deck and followed our lead in cooking their (first) breskfast’s.

We moved to the sunny corner at one point and began talking to Fortune Cookie who had been working on something unknown to us at first. After inquiring, we found out that he was brewing beer right there in his Smart Water bottle. He’d apparently done some already on the trail. He’s a chef and likes to experiment with flavors and such, and home brewing and I suppose trail brewing are just hobbies of his. This particular brew had some tangerine juice added, I believe a session ale, although my knowledge of the beer world is minimal. 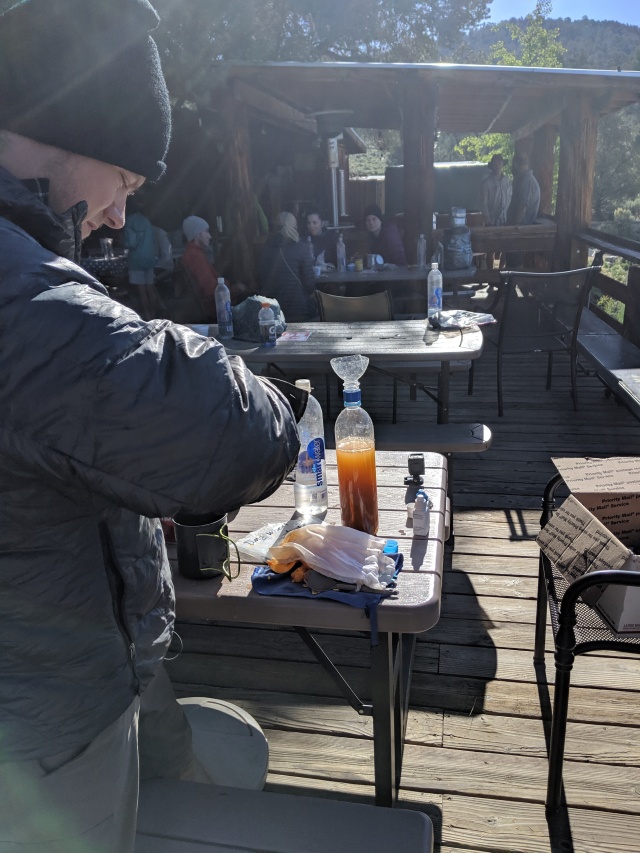 We didn’t talk to him right then, but Fortune Cookie’s dad, trail name of Arts and Crafts was at the other end of the table spending some time doing water color painting. I kept peaking over and noticed one was of the landscape looking out with the road winding through and the other was a nearby hiker with her green puffy jacket. Very cool. Time lapse experimentation again…We had quite the relaxing morning. Part of it was spent watching a hiker play fetch with the grille chef’s dogs. This little one was the fastest and most interested of the bunch.

At 8:00am, the grill opened and hikers all lined up. The all-you-can-eat pancake breakfast with sausage, eggs, hash brown, orange juice, and unlimited coffee was $10, so we went with that. No brainier. Stupendous. Even had M&M and blueberry varieties!

After breakfast, we visited the backpacker outfitter, 2 Foot Adventures, which is a silver bullet camper trailer parked in the lot. It’s the same one that we visited back in Warner Springs if you remember. No purchases were made however seeming as we hoped to check out the selection and prices at the other outfitter next. Triple Crown Outfitter was located a few miles down the road at Grumpy Bear’s Retreat. Similar to other towns, there seems to be a bit of rivalry/competition for the hikers business between the two places.

Around 11:00ish, we found a ride to take us over to Grumpy Bears. Upon arrival, we saw Snickers right away and got the lay of the land (He’d stayed there the previous night or two. Grit had too, but has now gone off trail with some others to see San Francisco area for a bit of a trail holiday). First up was the outfitter. I ended up handing over a good chunk of cash on some supplies to try and keep myself warm in the upcoming mountains. Waterproof gloves (Hallelujah!), an extra pair of Darn Tough socks, and some pb M&M’s of course.

Then, it was over to the restaurant for lunch. Here’s dad heading into Grumpy Bear’s restaurant.

Here, I got what I’d dreamed up in my head for the Kennedy Meadows stop along the trail, a Sierra Nevada Pale Ale! It just seemed appropriate you know. Cheers!

Dad and I each got a burger and fries too, accompanied by Kool-Aid who went healthy ordering a grilled chicken salad. After finishing lunch we joined Calzone, Cheer, and eventually Snickers at a nearby table. We discussed going into the Sierra together and sticking together somewhat. Folks like to use the term “grouped up”. I’d call it the formation of a Fellowship! For as my old comrade Boromir once said, and I’m just paraphrasing here, “One does not simply walk into the Sierra…”. Best to have a team to go in with!

I was ready to do battle…

After lunch and our brief planning session, it was back to the General Store in the back of a pickup truck. There was some rumors flying around that yesterday the police had been called by the Kennedy Meadows folks about hikers being transported illegally in the truck beds, but apparently it didn’t seem to stop them from doing it anyway.

Once back to our home court, dad got a Louis L’amour book from the store and relaxed with a cola, while I began assembling my pack with all the new items (ice axe, bear can, and fleece) to see how it’d fit. 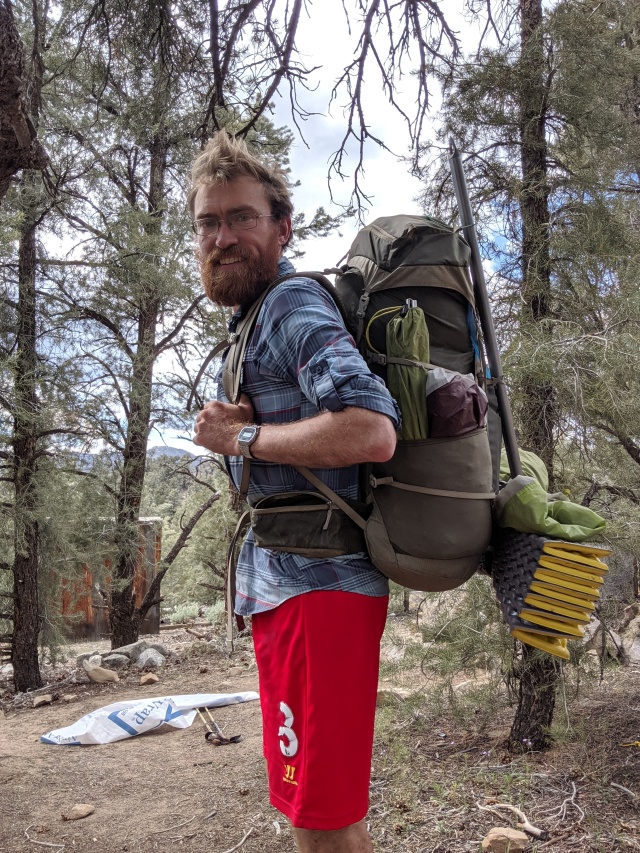 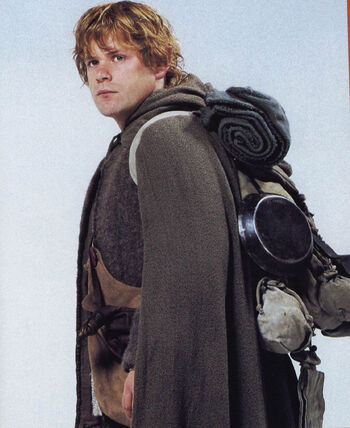 Maybe not. But, I hope in all of my preparations you didn’t think I forgot about my comrade Sumi. I found some material in the hiker box to outfit him for the colder weather. 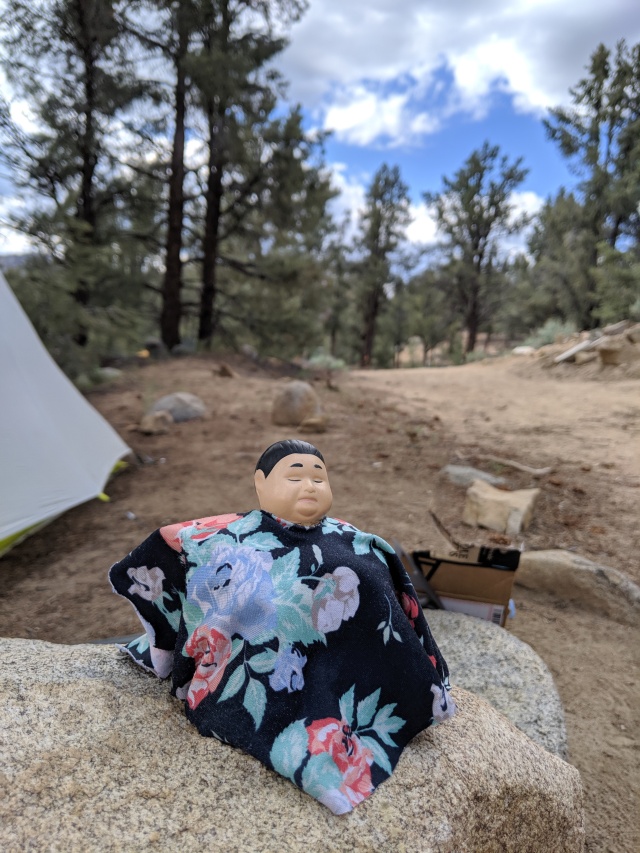 Believe me, that fabric is 100% merino wool 7,000 gram and has water proof coating to keep him dry!

Dinner was a lovely time on the deck with hikers all around each in bountiful conversation. 90’s music played in the background with both country and pop jams that I’ve come to know and love. Three Third Eye Blind songs were played as well as Savage Garden. So you know the DJ or playlist maker was on point. 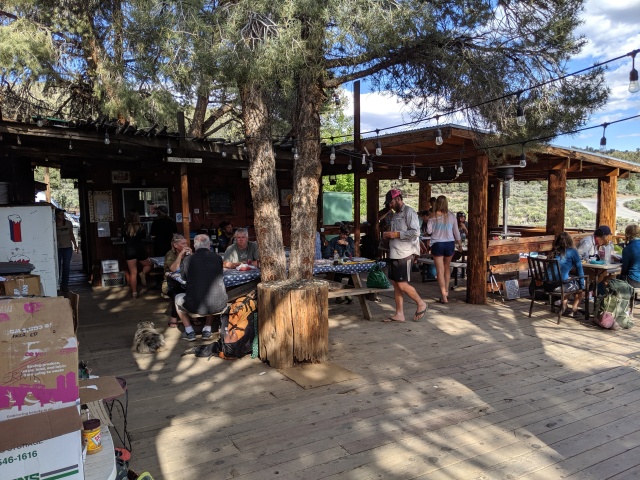 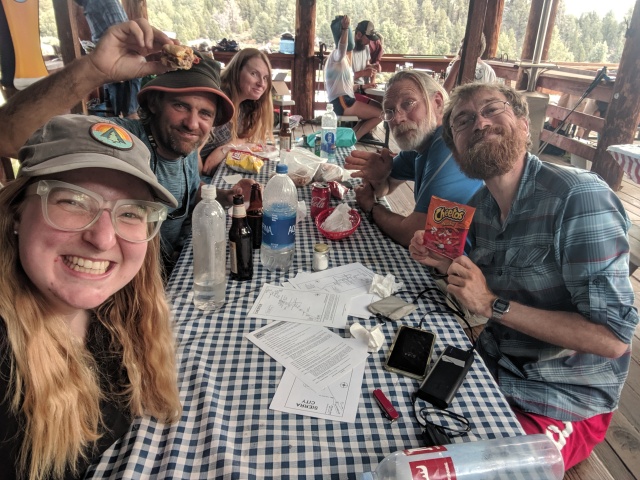 Of course ice cream for dessert. Well actually, this wonderful Gelato. 5 layers, so you know its good! 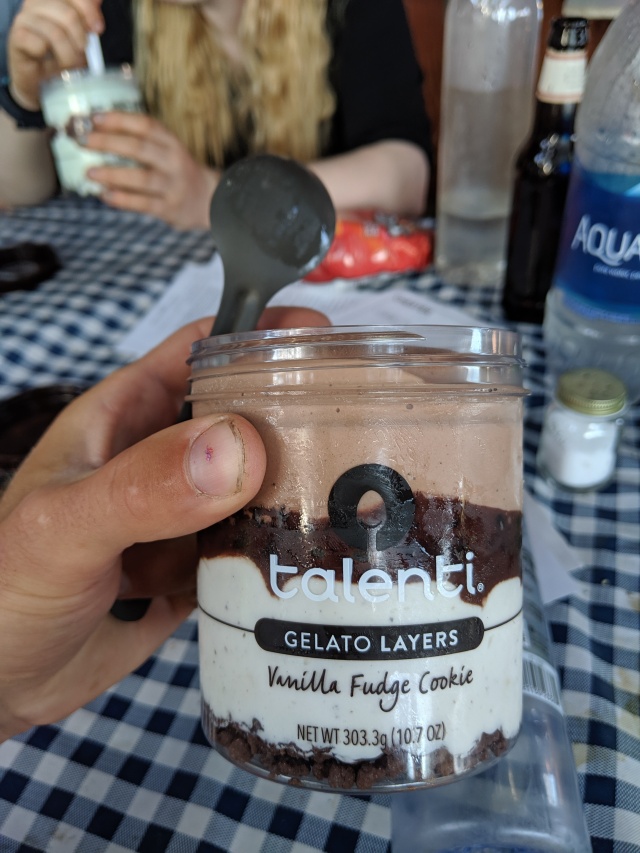 Hoping I don’t get sick from all the food and drink today…. seriously though, I went to bed not feeling great. The plan is to head out tomorrow and start climbing. Many of our group have to stay until the store opens, but dad and I plan to go early. We figure they’ll catch us.