Through Mordor to the Realm of Bend

We opted for an early rise this morning hoping to get into town at a reasonable time. The little campground we stayed at was off the PCT slightly, so at 5:37am, we left and made our way back to the main trail.We kept going through the lava rocks where we’d left off the day before… 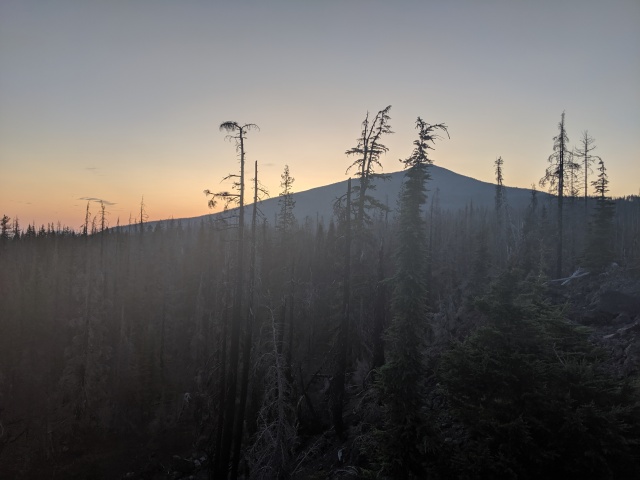 This stuff was pretty cool but man it was not kind to the feet. The trail was made up of the smaller chunks, gravel and cobble sized, all loose an grinding against one another. The rock is sharp and abrasive and jagged and coarse. You get the idea. Our path wound its way through, up and down the crazy formations, and then we popped out onto a road.

After crossing, the scene entered into yet another level of desolateness. The trees disappeared, the temperature level even in the morning was noticeable warmer above the rocks, and the trail climbed towards what could only be seen as Mount Doom to those who are learned in the ways of J.R.R. Tolkeins middle-earth. Yes indeed, we felt a little like Frodo and Samwise the Brave, but were comforted that Gollum wasn’t out there trying to pop out and attack us. In hindsight, looking at the pictures, it does appear a bit too bright and sunny to make the comparison 😉 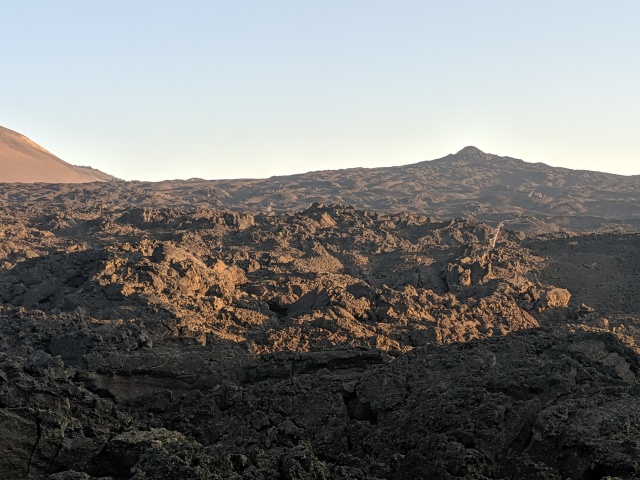 Behind us, we still had the lovely view of the Sisters (I think), so all hope was not lost…

We made it. Here we are at the end of all things.

Actually, this was just the crest point where the trail began going down. We were still in the field of lava rocks for a while.

We made our way closer to the pointy, wizards hat like mountain.

Around midday we observed three teenage kids come running by us. Yep, running…at a brisk pace. Curious we thought. At the same time though, we knew of a Big Lake Youth Camp that was coming up near the trail, so figured they’d likely come from there. Still, that was over a mile away. A bit further on, an adult runner and another kid came by. I chatted with the guy for a bit and he invited us down to the camp for lunch!We’d actually been planning to visit anyway and had heard rumors of their hospitality towards hikers (our Guthook’s app was full of comments about it), and so off the side trail to the camp we went.

It was pretty amazing. We found our way to a small building that was set up specifically as a PCT headquarters station. We were greeted by PCT Mama, a college age camp staff member, who went through a whole thing about all the things they offer for us hikers…laundry, showers, hiker box, package pickup, camping down along the shore of the lake, and meals! Very cool.

We relaxed and caught up with some hikers we knew and then at 1:00pm headed down to the large “A” framed dining hall. Exactly what you expect a camp to look like. For me, it most closely resemebled Camp Ao-Wa-Kiya back in Michigan, a bit dated (as a camp should be), but a lot of character and evidence of love overflowing! We went through with staff and ate upstairs before the mass of kids came. Veggie burritos and delicious gooey brownies! 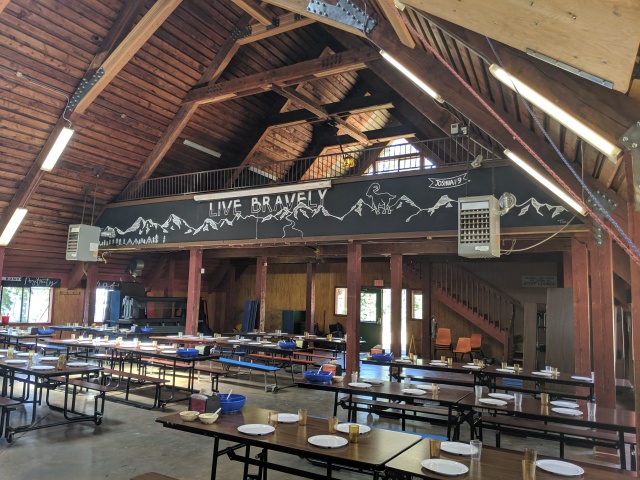 In the end we probably spent a good three hours hanging at the camp. We left with full bellies. It was another 3 or 4 miles until we came to Highway 20 where we hoped to make our way into Bend, Oregon. Along the way, Snickers saw his first bear along the trail 😉

And I snacked on some huckleberries (I hope that’s what they were). 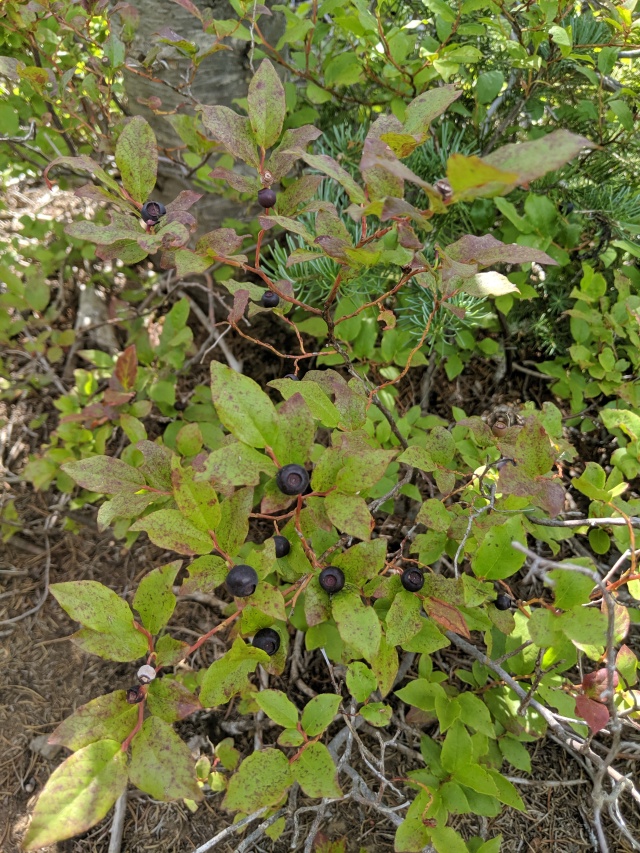 And got to this marker…

Three hitches later, thanks to Pam and Nick and the couple from Boston, we were at our hotel about 40 miles west of the trail! Why so far? Well there is an REI in Bend and we hoped to regroup with gear!

Another exciting thing about this stop was that we’d been texting with Calzone and Cheer and found they were doing a zero day here (actually staying in nearby Sisters). Woo hoo! We made plans to meet up and after dumping our packs in the hotel, we started walking to meet them. They were about a mile and half away at the REI. About halfway, Calzone pulls up in a black SUV to pick us up. Her sisters friend Heather actually lives in Bend and was kind enough to show her and Cheer around during their stay. And to pick us smelly hikers up too!

We had a great time together: Snickers, TW, myself and then Calzone, Cheer, Heather, and other hiker friends Stich and Ragdoll all getting Sushi and Ben and Jerry’s! Lots of stories, lots of laughs, good times had by all. They planned to get on trail whereas we are doing our own zero then, so they’re still a day ahead, but it was so good seeing them again. Our three man team walked back and crashed at the hotel looking forward to resting tomorrow and taking care of some serious town stuff!