TW and I had agreed on a 7:00am departure time. Since this is a bit later than I’m accustomed to, I was up and ready beforehand. While waiting for the Warhorse, I enjoyed relaxing while looking out at this wonderful morning view of Waptus Lake. The clouds were like little cotton balls overhead making for quite the scene… 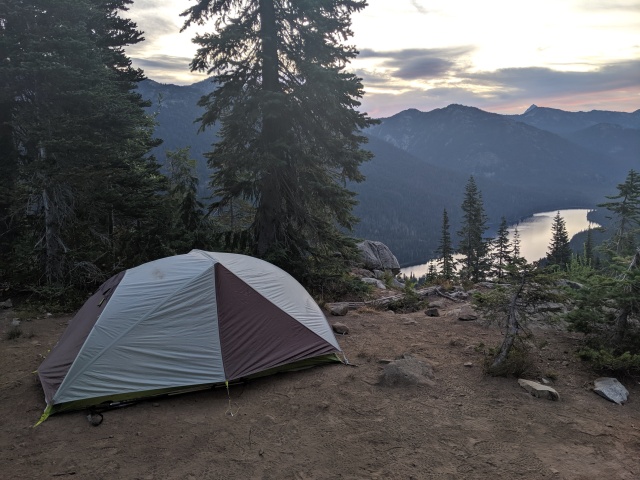 Once hiking, the morning light was putting the spotlight on these beauties… 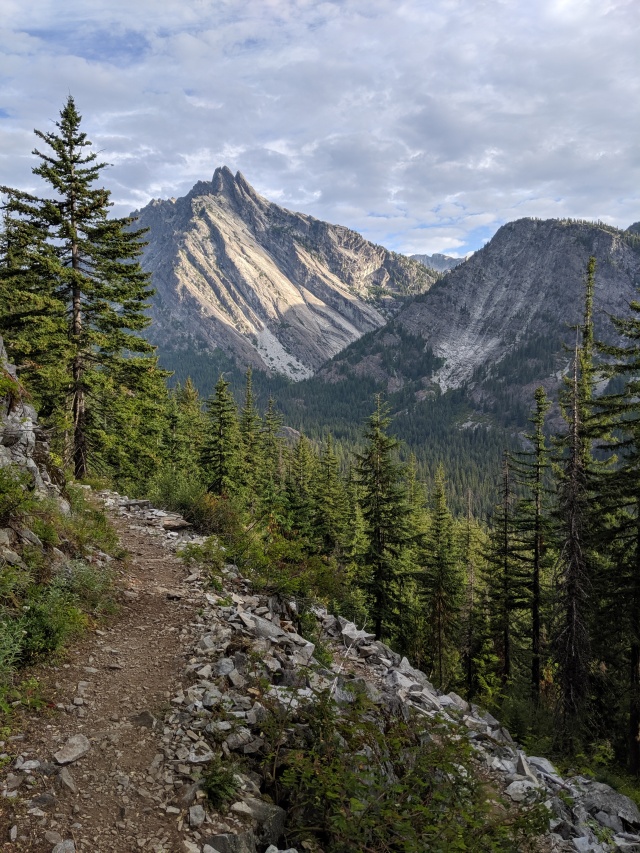 Cheer had left camp first, but TW and I weren’t long behind her and we all three ended up walking together for the morning stretch. Calzone opted for a lie in. Down, down, down we went. The trail neared Waptus Lake, the one I’d viewed from above, but rather than visit its shore we circled around it and went parallel to it up above in the forest. We crossed over a few streams with waters flowing down to the lake. Some had nice bridges for our safe passage. After 5 miles or so, the three of us stopped for a relaxing breakfast break. 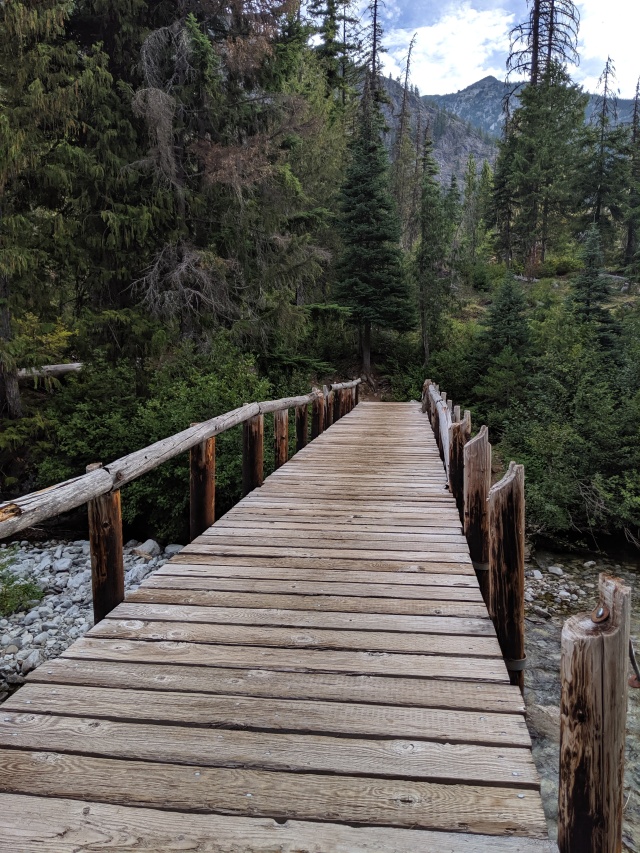 We each left breakfast at different times. We had stopped just prior to our longest climb for the day, a stretch of about 7 miles and gaining over 2,000 feet elevation. And so, we each battled the climb at our own pace and with our own methods. About half way up, a side trail led to Deep Lake, which I thought I’d check out closer, since the trail looked flat and the lake very picturesque. 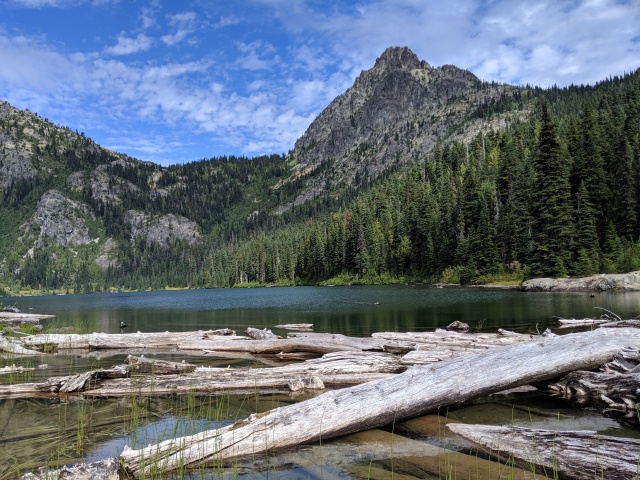 Afterwards, I climbed up and started seeing views looking down on this bad boy, with the monster mountains encircling it as well.

Also on the climb up, I found my way around these grouse/Washington chickens….

We had picked out a spot to meet at lunch which appeared to be at the crest before going down, but once up there realized the site was actually just over the other side of the ridge. It was a nice spot though, relatively flat in the shade of some big pines, and at the foot of what we found out is called Cathedral Rock. TW was already there when I arrived and we got right into our lunches, a bit famished from our hike up. We had several visitors whilst enjoying our break, lots of day hikers and weekend backpackers.

One group joined us for a while chatting about various aspects of trail life and other such things. If I’m remembering right, there names were Rick and his daughter Hailee, Angela, and Robert the dog. They were super nice and even gave us some on-trail trail magic! And not just anything, delicious french bread, salamai, prosciutto, and a variety of fancy cheeses. Rick is hoping to do the trail next year and seemed to be well prepared, knowing more about the trail than we did after having just hiked most of it.

TW and I had a lengthy lunch, but didn’t end up seeing either Cheer or Calzone. Thinking they probably stopped earlier, we continued on our way, now hiking down for a while until we reached a cascading creek…

After filling up our water bottles, filtering, and doing a little washing up, we went on our way. I was feeling pretty good and had the right tunes to get me hiking strong up the hill to our tent site. I was moving and even stayed in front of TW, which doesn’t happen often.

I stopped when I reached Deception Lakes, dropped my pack, and began my scouting for a spot for the four of us to camp for the night. There were lots of weekend campers scattered around the lake perimeter. When I returned to my pack unsuccessfully, TW was there and we decided to set up near some other folks where there was space between the two main lakes. After setting up, along came a Cheer and then soon later a Calzone as well! 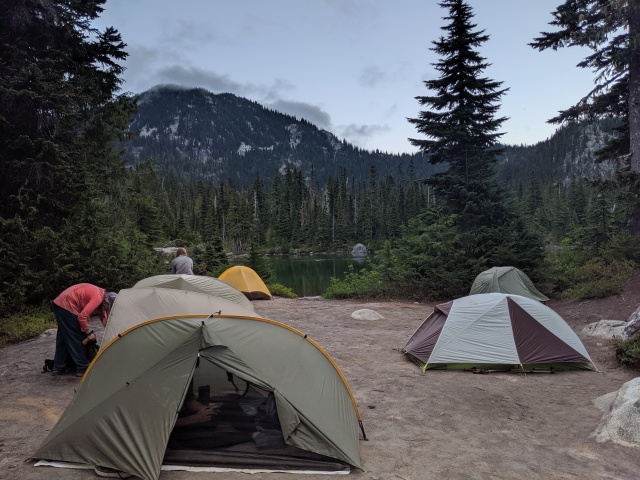 During my earlier scouting mission, I’d observed an excellent place from which to jump into the lake for a swim! It wasn’t exactly warm at this point in the evening. In fact, a cloud cover had just made its way overtop the mountains to block the sun from view. Even so, Calzone and Cheer were up for it, and so the three of us made the leap off the boulder to the ice bath below!

I went first and did a sort of belly flop plunge. I tried to make it seem like it wasn’t all that cold, but my shaking, high pitched voice gave me away. Nevertheless, my comrades Cheer and Calzone followed right after. We may have awoken all the early snoozers around the lake with our yelling, but in our opinion, it was worth it. We slightly dried off and then each went right into our tents for the evening. Another great day on the trail and a great short evening in camp.